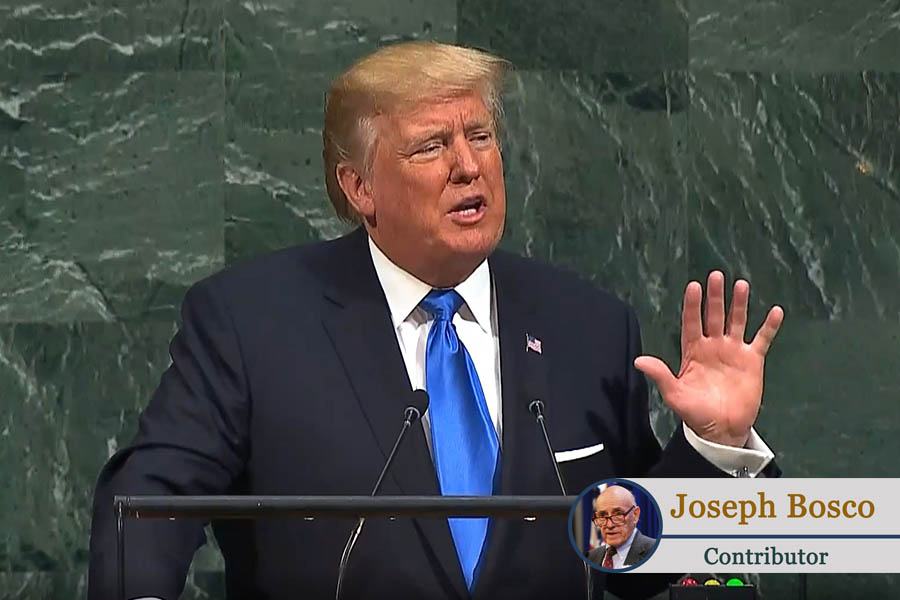 ◎ The Trump administration should continue to emphasize that North Korea’s nuclear program ultimately does not ensure regime survival but regime demise.

One of the three pillars of President Trump’s “maximum pressure” campaign against North Korea — the potential use of force — is off the table now that he and Kim Jong Un are admiring pen pals.

The second pillar — strong economic sanctions — is being eroded by the illegal, yet quite open, subterfuge encouraged by Xi Jinping, another supposedly friendly Asian dictator.

The remaining third leg of the Trump policy — human rights — has languished since the president focused on it early in his term in three major speeches and dramatic personal encounters with victims of North Korea’s brutal system.

The all-but-explicit message to Pyongyang then was: your regime is beneath contemporary standards of humanity and decency and is unfit to govern your people. That was exactly the message President Ronald Reagan delivered to the Soviet Union and the communist dictators of Eastern Europe — the Evil Empire — and history has attested that it greatly facilitated the collapse of those totalitarian systems.

The difference between the approaches of Reagan and Trump is that Reagan kept at it with a sustained message that continued to shine a light on communism’s moral bankruptcy — even as he pursued arms control agreements with Mikhael Gorbachev.

But Kim — and  Xi, his financial lifeline — knows that Trump can instantly return to the human rights issue and revive the prospect of regime change if he is not satisfied with progress on the North’s denuclearization and related issues. That is why, in his meeting with Vladimir Putin in Moscow last week, their first, Kim asked the Russian leader to convey to the American president his bottom-line condition for denuclearization: a security guarantee for the Pyongyang regime.

The noteworthy, but largely unremarked, element of the request is that Kim wants assurances against not only an external military attack, but also against efforts at internal subversion and domestic revolt.

Kim may have been reminded of the precariousness of his position by last month’s invasion of the North Korean embassy in Spain by a group calling for his regime’s ouster. Speculation in the media that the CIA was somehow involved in the illegal incursion may have fed already fevered paranoia by the insecure North Korean leader.

Events in Venezuela provide an even clearer example to Kim of what his eventual fate could be.  After all, Trump used similar language in condemning the Maduro regime as he did in his earlier denunciations of the Kim clique. In both cases, the president questioned the legitimacy of the authoritarian regimes because of their moral depravity and their failure to deliver a decent standard of living for the population.

Now, the Venezuelan people, encouraged by external political and material support, may be on the verge of finally ousting the oppressive rulers. Trump, like Reagan, may be able to achieve a professed goal of ridding the world of an evil and dangerous system, without the need to resort to the use of military force.

Kim undoubtedly remembers Trump’s threat of force in his United Nations speech — the “fire and fury” was to be directed not simply at taking out the threatening nuclear and missile facilities but “the complete destruction of North Korea.” It was a powerful motivating factor in getting Kim to the negotiating table.

Kim might reason that if Trump’s goal is to get rid of him one way or another because of America’s obsession with human rights, why should he make it easier by giving up his nukes and missiles? North Korean representatives have made it clear they have not forgotten what happened to Moammar Gadhafi when he did that. And they see what the Trump administration is doing in Venezuela, which has no powerful deterrent weapons of mass destruction.

The president’s response to those existential concerns should be to affirm that America does want to see positive change — not only in North Korea’s international behavior but in the way it treats its own people, because history demonstrates that the two inevitably go together.

The Trump administration has made clear that it — and, for that matter, the international community — is prepared to help navigate a soft landing for the Kim regime: a “bright future” of economic prosperity and significantly higher standard of living for the North Korean people.

The South Korean model beckons. Economic benefits alone will give the Kim regime greater political legitimacy than it has with a deprived, even starving, population. But the next step, political reform, must also follow, and the place to start is with the methodical closing of North Korea’s atrocious gulags, a throwback to the morally stagnant Soviet era.

So, Kim must do two things to put his regime on the path to international and domestic rehabilitation: produce a) a full declaration of all its mass destruction weapons and missile delivery systems and b) a schedule for the destruction of the concentration camps.

The Trump administration should continue to emphasize that North Korea’s nuclear program ultimately does not ensure regime survival but regime demise — and that the same is true of the systematic dehumanization of the North Korean people. Kim is more likely to live a long and peaceful life without both.Otherwise, what worked for Reagan and what is working for Trump in Venezuela could apply as well to North Korea.