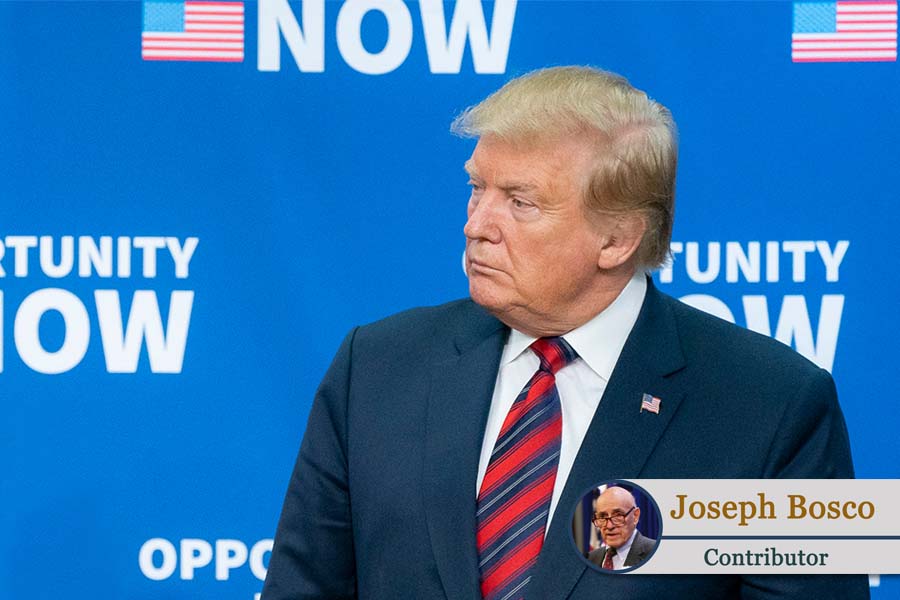 ◎ Consistency and constancy in support of both America’s national interest and the rules-based international order have been in short supply over the past decade or more.

If President Trump follows through with his threat to increase tariffs on imported Chinese goods from 10 percent to 25 percent unless China complies with its fair trade obligations, it will be a healthy development in U.S.-China relations and good for U.S. foreign policy broadly.

Consistency and constancy in support of both America’s national interest and the rules-based international order have been in short supply over the past decade or more.

Even this president, while laudably breaking with the self-defeating rigidities of prior administrations, sometimes has sent mixed signals, especially on U.S.-China relations.

As president-elect, he acted in what in a normal world would have been considered a courteous manner by accepting a congratulatory phone callfrom a fellow democratically-elected president, Tsai Ing-wen of Taiwan.

But, because it had never been done before, it caused nervous jitters in the foreign policy establishment and angst in Beijing. Didn’t this political neophyte know that Tsai was to be treated as the non-president of a non-country, merely the lesser administrator of one of two unequal systems that were part of one actual country?

To make matters worse, Trump met the avalanche of expert criticism by doubling down, questioning the entire One China theology that undergirded the architecture of U.S.-China and U.S.-Taiwan relations.

When convinced that eroding the foundation of the relationship carried some unnecessary early risks to the larger agenda he had in mind, the former builder backed off a bit. He said he would not repeat the offense without checking with the big boss of the operation in Beijing. He expected this tactical retreat to open the door to a strong cooperative relationship with Xi Jinping, which did seem in the offing for a time.

But, in the meantime, his administration undertook, in lower-key ways, to deepen and broaden the longstanding, if sometimes erratic, U.S.-Taiwan relationship. The president readily signed the Taiwan Travel Act and began authorizing more frequent high-level visits; released a long-delayed arms sale to Taiwan; and dispatched U.S. Navy ships through the Taiwan Strait.  By its actions and public statements, the administration warned Beijing that it is prepared to respond if China provokes a response by acting rashly against Taiwan (though some in the military and Communist Party still doubt the U.S. commitment, thanks to the legacy policy of strategic ambiguity).

Related to Taiwan, Trump has dispensed with the ambiguity inherent in the Obama administration’s scattered faux Freedom of Navigation operations — “innocent passages” — in the South China Sea, which China claims as its sovereign maritime domain. The Navy now conducts frequent full-fledged FONOPS in those disputed waters to confirm free and routine access to the world’s oceans under international law.

But on other issues, particularly in the economic realm, Washington’s message to Beijing at times has been less steady, and the uncertainty of U.S. will easily could spill over into security concerns.

The Commerce Department last year banned U.S. companies from selling components to ZTE, the Chinese entity caught illegally shipping goods to North Korea and Iran. But, after a personal appeal from Xi, the president reversed the decision because it was causing the Chinese leader too much domestic pain.

Similarly, Trump acknowledged at the Hanoi summit that China was violating United Nations sanctions against North Korea, but that he trusts Xi to cooperate with the international community on the nuclear crisis. This, despite the fact that Kim Jong Un’s negotiating posture noticeably stiffened after Xi summoned him to Beijing before the first Trump-Kim meeting, in Singapore.

And the president also demonstrated his generous approach to these two adversaries when he publicly absolved Kim for any culpability in the torture and death of Otto Warmbier.

On another economic/security issue, Beijing hopes the touted personal rapport between Trump and Xi will facilitate a reversal of the U.S. decision to ban the telecommunications company Huawei from participating in the U.S. acquisition of 5G equipment.

Secretary of State Mike Pompeo stated this week that, although Washington is pressing Beijing in a number of channels over the human rights atrocities China is committing against the Uighurs, the issue is not explicitly included in the trade negotiations, which already are fraught on purely economic grounds. The administration seems committed to finding appropriate avenues to deal with that further Chinese Communist Party assault on international norms.

China already seeks to renegotiate commitments it made in the trade talks — the administration suspects “renege” would be a better term. The Chinese negotiators were stunned by Trump’s latest ultimatum because, they said, the U.S. president has made such threats in the past and not acted on them. Resolution of the trade issue on terms that meet U.S. demands for fair, reciprocal, transparent treatment by China will have a highly beneficial impact on U.S.-China relations across the board because it will make clear to Beijing that the old one-sided geopolitical game is over. The National Security Strategy and National Defense Strategy lay out the new, clear-eyed view of Chinese behavior. Trump can tell Xi (and Kim) it’s not personal, just business. America’s national security trumps presidential bonding with hostile Asian dictators.

For those who argue that tariffs are not a one-way street and U.S. farmers and consumers will pay a price when China retaliates, the answer must be that when the national interest is genuinely at stake, Americans always have been willing to sacrifice in far more traumatic ways than in their pocketbooks.