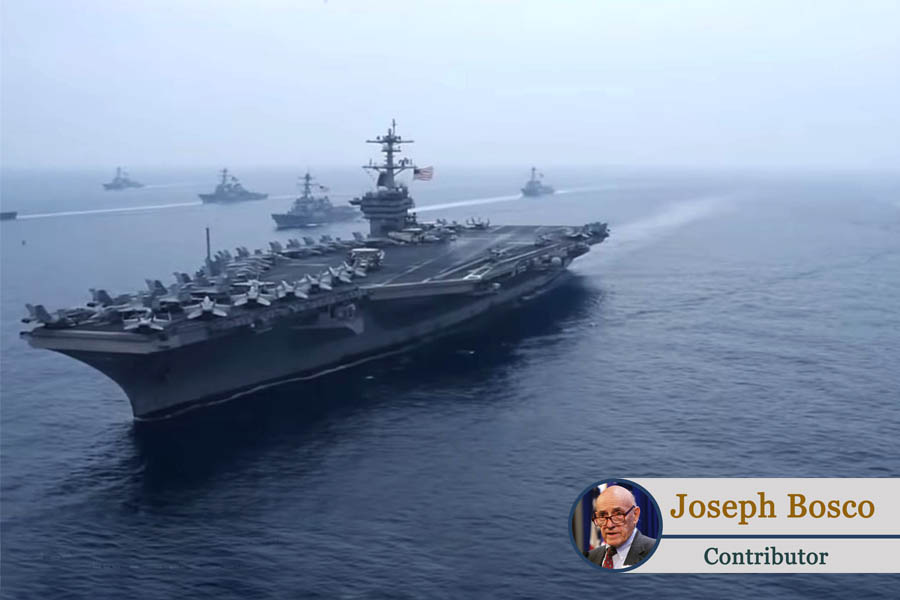 America’s Struggle with China and North Korea is for Keeps

◎ Existential struggles are not conducive to compromise, especially when the opposing sides see the competition in those stark terms.

Existential struggles are not conducive to compromise, especially when the opposing sides see the competition in those stark terms. The United States is in such confrontations with the People’s Republic of China (PRC) and its junior communist ally, the Democratic People’s Republic of Korea (DPRK).

North Korea’s dynastic regime has viewed the United States as its implacable enemy at least since the Korean War when America stopped it from conquering the South. It still presents an existential threat against South Korea with thousands of artillery tubes targeting Seoul, and America still stands in its way.

Three generations of Kim regimes have finally succeeded in making their small, impoverished country enough of a nuclear and missile power to constitute a mortal threat to cities in the United States and to its Japanese ally. The weapons were developed to deter the U.S. either from an unprovoked attack or from defending the South against another North Korean invasion. Now they also strengthen Pyongyang’s — and Beijing’s — leverage over the West.

The fact that North Korea was able to accomplish that goal with material support and diplomatic cover from Communist China spoke volumes about the intentions of Beijing itself — but Washington and the West were not listening.

Though China had been a nuclear weapons and ballistic missile state since the 1960s, perceptions of its intentions had evolved. In the first decades of the PRC, Mao Zedong’s “wars of national liberation” proclaimed his designs on the international order. He once said that China would benefit from a nuclear war between the major powers — the tens of millions of people killed would deplete Russia and America but leave China with a reduced, yet still massive and intact, population. For perspective on the monstrosity of Mao’s thinking, his rule is estimated to have caused the deaths of anywhere from 30 million to 70 million Chinese.

After Mao himself passed from the scene, it was universally assumed that virulent anti-U.S., anti-Western hatred also had mercifully ended. China’s intentions no longer were seen as irreparably antagonistic toward the West, which was now irreversibly committed to the policies of engagement. The era of the reform-minded, low-key Deng Xiaoping was characterized by his admonition to the Communist Party: hide our capabilities and bide our time — which effectively meant hide our intentions. The decades of Chinese militarization that followed were met in the West by decades of benign neglect.

It took the arrival of Xi Jinping and his open avowal of Maoist ideological fervor to confirm that Chinese communist attitudes toward the rules-based international order and its leading exponent, the United States, never really disappeared but only remained disguised behind the cloak of engagement.

Unlike its predecessors, the Trump administration decided to confront North Korea and China, diplomatically at first, then with economic measures, including tariffs for violations of trade rules and punitive sanctions for flouting international restrictions on nuclear and missile development.

The president decided to leaven his firm stances with friendly rhetoric expressing respect and even affection for the two dictators. When they abused his trust, he dismissed charges of bad faith against them, excusing Kim Jong Un of responsibility for Otto Warmbier’s death and downplaying Pyongyang’s recent missile launches as “standard” behavior. He gave Xi a complete pass while China continued to subvert United Nations Security Council sanctions against North Korea.

Trump needs to acknowledge, at least to himself, that his personal sunshine strategy may be undermining the effect of his administration’s firm approach. His expressions of good feelings toward the North Korean and Chinese leaders can induce them, or hardliners in their regimes, to believe that at any moment the president is about to overrule his sound national security team and return to the more accommodationist policies of prior administrations.

That would be unfortunate, since the president’s strong policies have succeeded in encouraging U.S. allies and security partners to join Washington in resisting unlawful and aggressive North Korean and Chinese behavior. Following America’s lead, ships from NATO allies have made defiant, but perfectly legal, transits through the Taiwan Strait, despite Beijing’s expressions of outrage.

In recent days, navies from a number of regional countries have joined the U.S. Navy in operations in the South China Sea in repudiations of China’s illegal and absurd claim to virtually that entire body of international water.

These are good beginnings for an awakened international community’s challenge to the two dangerous Asian powers, but more needs to be done to sustain the effort and it will require continued U.S. leadership.

Given North Korean and Chinese foot-dragging and reneging on prior commitments, and in addition to other symbolic and substantive measures proposed here and elsewhere, the administration should consider the following:

North Korea’s nuclear and missile capabilities have caught up with its malign intentions toward the United States and its allies. Thanks in part to Western mistakes in ignoring the threat, now it has both. China long has had both menacing capabilities and hostile intent, but that same wishful thinking disregarded the danger for too long. Now we must confront the threats from both adversaries by a steady ratcheting up of pressure. Others in the West have begun to show they are prepared to join the existential struggle.