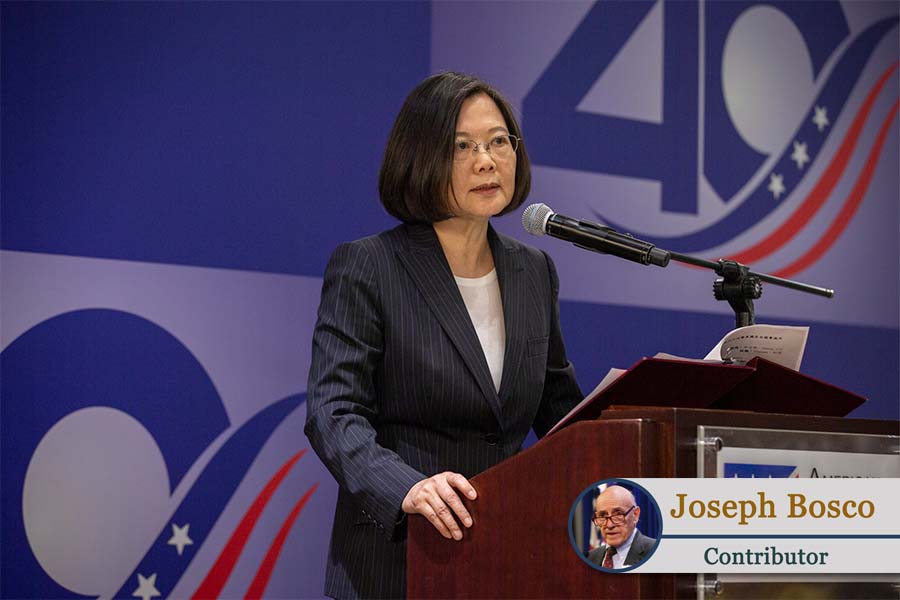 Save the Taiwan Relations Act, but Scrap Ambiguity: Defend Taiwan

◎ The China threat toward Taiwan has to be confronted at some point.

This past week marked the 40th anniversary of the Taiwan Relations Act(TRA), the indignant congressional response to President Jimmy Carter’s switch of diplomatic relations from the Republic of China on Taiwan to the People’s Republic of China (PRC).

Carter simply put into place the scenario envisioned by President Richard Nixon when he opened informal relations with the PRC. That commenced the executive branch’s initial abandonment of Taiwan in the vain hope that Beijing would help the United States manage a graceful exit from the Vietnam War.

Nixon’s national security adviser, Henry Kissinger, negotiated with Premier Chou En-lai to produce the Shanghai Communique — the original sin of U.S.-PRC relations. In what Nixon considered a masterpiece of ambiguity, it “acknowledged” the fact that China claimed Taiwan and said “all Chinese” on both sides of the Taiwan Strait (meaning the communist and anti-communist dictatorships) agreed. It did not state Washington’s position on Taiwan’s sovereignty as long as it was resolved peacefully.

But, while stating America’s precondition for a nonviolent resolution of Taiwan’s status, the communique implicitly acknowledged that China reserved the right to take Taiwan by force if it didn’t go “peacefully.”

Indeed, when Mao Zedong told Nixon and Kissinger that China could wait 100 years to take Taiwan, Kissinger expressed surprise that it would take that long. (Kissinger never wavered from that impatient expectation on Beijing’s behalf, publicly warning Taiwan in 2007 that “China will not wait forever.” Xi Jinping later came to power echoing Kissinger’s adamant approach over Mao’s protracted timeline, saying the Taiwan question cannot be passed “from one generation to another.”)

The TRA was intended to correct that misalignment of U.S. policy. It provided that it is U.S. policy “to provide Taiwan with arms of a defensive character and to maintain the capacity of the United States to resist any resort to force or other forms of coercion that would jeopardize the security, or the social or economic system, of the people on Taiwan.” It did not unequivocally commit the United States to come to Taiwan’s defense as the now-scrapped Mutual Defense Treaty of 1954 had done after the Korean War.

Ever since, Beijing has sought to undermine the TRA and make it irrelevant to U.S.-China relations, while successive Congresses have strived to reinforce and build upon it with further pro-Taiwan legislation. Administrations of both parties have struggled to uphold the peaceful purposes of the TRA while maintaining a balance between reassuring/cautioning Taiwan and mollifying/warning China. The pattern of presidential straddling is evident in a series of PRC challenges since 1979.

As soon as Ronald Reagan began his presidency in 1981, China started lobbying his administration to emasculate the TRA provisions on arms sales to Taiwan.

Somehow, Secretary of State Alexander Haig maneuvered the pro-Taiwan president into agreeing to the Third Communique, severely limiting future weapons transfers with the stated aim of phasing them out entirely. After expressions of congressional outrage, Reagan realized what he had done and immediately accepted the Six Assurances requested by Taiwan: no revision of the TRA, no change to Taiwan’s sovereignty, no set date to end sales, no advance U.S. consultation with China, no U.S. mediation role, and no U.S. pressure for negotiations.

A more kinetic PRC challenge to the TRA’s vaguely implied security commitments came in 1995 and 1996 when China fired missiles toward Taiwan to protest President Lee Teng-hui’s visit to Cornell (after Congress pressured the State Department to reverse its decision not to grant a visa), then during Taiwan’s first direct presidential election. President Bill Clinton first sent a U.S. carrier through the Taiwan Strait, then half-apologized to China for the “weather diversion.” In the second incident, he dispatched two carriers but kept them out of the Strait when Beijing threatened a “sea of fire.”

In the brief interlude between those events, Chinese officials cut to the chase and asked Joseph Nye, the defense department’s chief Asia official, how the United States would respond to a direct PRC attack on Taiwan. Nye did not invoke the TRA, but said “it would depend on the circumstances.”

Beijing’s take-away lessons from the statement and the military confrontations: (a) Washington did not feel an iron-clad commitment to Taiwan’s security under the TRA, and (b) under the right circumstances (from Beijing’s perspective), America could be deterred from intervening in Taiwan’s defense. For the next two decades, China proceeded to build its attack submarine fleet and anti-ship ballistic missile arsenal to create those unpleasant circumstances, known as its anti-access/area denial strategy. Touting Chinese confidence in its deterrent effectiveness, a Chinese admiral recently threatened to almost-instantly kill 10,000 Americans by sinking a couple of U.S. carriers.

In 2005, Beijing put a legal gloss on its anti-TRA and anti-Taiwan campaign when it passed the Anti-Secession Law proclaiming China’s right and intention to attack Taiwan, even if it didn’t declare independence but just took too long to submit to “peaceful” unification. So, now Beijing has put all the pieces in place for its contemplated seizure of Taiwan.

It is up to Washington to invoke the TRA and tell China that attacking Taiwan certainly would mean war with the United States. To be credible, the warning has to be public. Chinese leaders have proved themselves rational actors when they fully understand the consequences of their actions, so there would be no war, even if Taiwan politicians tried to take advantage of the U.S. security guarantee by making moves toward formal independence.

The China threat toward Taiwan has to be confronted at some point. Given the trade war and other U.S. legal actions against malign Chinese actions, Washington has greater leverage under this administration than it has experienced in decades.