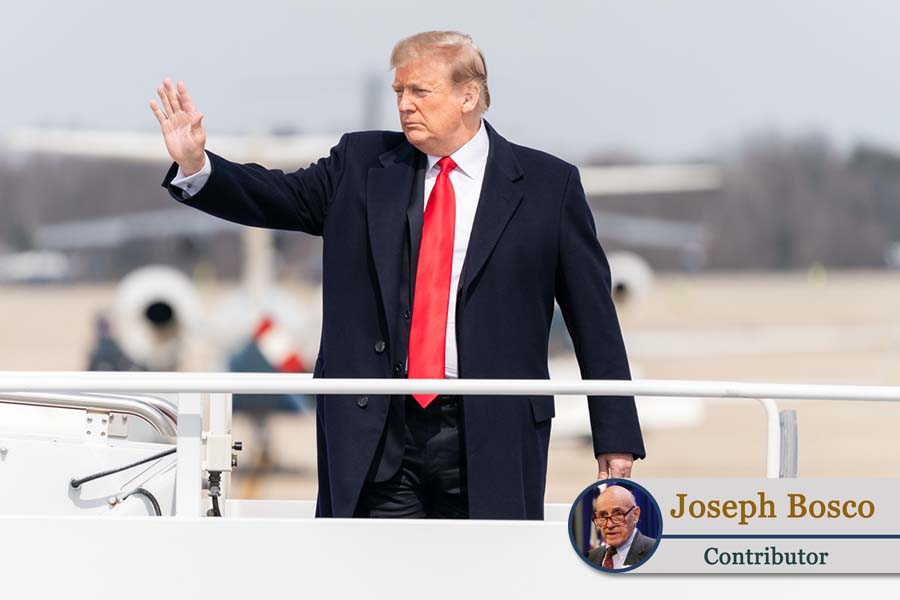 On China and North Korea, Let Trump be Trump

◎ U.S. national security would benefit from Trump’s return to the core principles that guided his original instincts toward China and North Korea.

Kim Jong Un’s announced new weapons test and his ultimatum to Washington to strike a deal before the year is out reinforce the urgent need for President Donald Trump to return to the clear-eyed positions he took on issues involving China and North Korea during the campaign and as president-elect.

In his run for the presidency, Trump’s lack of foreign policy experience was widely seen as a decided disadvantage. Yet, somehow, with his instinct and practical business experience, he managed to grasp the strategic realities undergirding the China and North Korea problems far more astutely than did his opponent Hillary Clinton or his senior adviser Henry Kissinger.

He took great pleasure in criticizing his predecessors for failing to come to grips with the economic and security threat from China and the nuclear security threat from North Korea. He claimed audaciously that he would achieve success in those challenges and that it would not be all that difficult.

Then he surprised most people by seeming to be on his way to making good on those brash predictions with his “maximum pressure campaign,” directed primarily against North Korea but indirectly targeting China as well. The campaign’s elements — threats of war, deeply punitive economic sanctions, and disparagement of the Kim regime as monstrously unfit to remain in power — shocked the North Koreans into abruptly halting the nuclear and missile tests that had escalated since the end of the Obama administration. Kim seized upon the accommodating gestures from South Korean President Moon Jae-in and agreed to talks with Trump.

Beijing, as well, suddenly became more amenable and expressed its willingness to talk through the nettlesome trade issues that agitated the president — even as his administration beefed up Freedom of Navigation Operations in the South China Sea, and expanded high-level contacts and interaction with Taiwan.

But, progress has been uneven. Some U.S. gains made against the multifaceted China challenge inexplicably were given back. Trump’s groundbreaking presidential telephone conversation with Taiwan’s leader, Tsai Ing-wen, soon was followed by his commitment not to do it again without first checking with China’s Xi Jinping, whose hostile policies increasingly threaten Taiwan.

Similarly, his dismissal of the “One China” policy as an irrevocable U.S. commitment was walked back within weeks. The reversals were reminiscent of President George W. Bush’s pledge to defend Taiwan — “whatever it takes” — that was erased immediately by his administration’s assurance that U.S. policy had not changed.

On the North Korean front, the effectiveness of the strongest sanctions regime ever imposed on Pyongyang has been undermined by Chinese and Russian cheating. The president publicly noted Beijing’s chicanery in his remarks after his Hanoi summit with Kim, but said he appreciates the limited cooperation China has provided.

More recently, in his goodwill campaign with Xi, Trump went further and canceled penalties on Chinese shipping companies that were illegally dealing with North Korea. As with his decision to reverse the punitive sanctions on ZTE for violating sanctions on Iran, and the apparent softening of the U.S. position on Huawei’s chief executive, also for breaching Iran sanctions, Trump’s sudden lack of urgency on North Korea has taken place in the context of trade negotiations with China.

Just as North Korea’s previously highlighted human rights obscenities were overlooked for the sake of progress on denuclearization — in Hanoi, Trump even publicly absolved Kim of responsibility for the torture and murder of American student Otto Warmbier — now denuclearization itself seems to be taking a back seat to the prospect of success in the trade talks.

Yet Trump is on the verge of jettisoning a key demand in the trade negotiations: that China stop subsidizing its state-owned firms and other strategic industries. And his threat to increase U.S. tariffs from 10 percent to 25 percent may no longer be on the table, since it would put a damper on his personal chemistry with Xi.

In short, in response to Trump’s emphasis on warm personal rapport with the Asian dictators, both Pyongyang and Beijing have dug in their heels and appear ready to call Washington’s bluff.  As Trump’s shifting bottom-line negotiating posture threatens to become more like Obama’s, which he repeatedly ridiculed as weak, it is fair to ask what has changed to erode the strong advantage Trump had over both China and North Korea last year.

The president hardly could enjoy a stronger national security team at the departments of Defense and State and the National Security Council. And his trade negotiators, despite some hesitancy at Treasury, are equally tough.

But someone not in the administration has stepped forward to take credit for moderating the president’s instinct to go for the big deal. Michael Pillsbury, whom Trump has called “the leading authority on China,” claims to have the president’s ear on all China-related issues and to have pulled him back repeatedly from his more confrontational posture.

Enjoying extensive contacts with Chinese officials and businessmen, Pillsbury has flattered Trump with accounts of their admiration of him as a special American president, one with “a big brain.” He claims to have opposed the Trump-Tsai phone conversation and dissuaded the president from further contact with Taiwan’s president. He helped delay the sale of F-16 fighter jets to Taiwan, and dissuaded Trump from meeting with the Dalai Lama. He urged that the U.S. Navy should revert to the feckless Obama practice of “innocent passage” in the South China Sea, which effectively concedes Chinese sovereignty. Fortunately, on this issue, Trump ignored Pillsbury’s advice.

Pillsbury prides himself on playing a Svengali-like role with Trump on all things China, and it is clearly a more accommodationist role in line with the approach of previous administrations than with Trump’s original inclinations. Given Pillsbury’s history, none of this should be surprising. For at least 30 years of U.S.-China relations, Pillsbury was a self-proclaimed “panda hugger,” including during his tenure at the Defense Department working on China security issues. He has said he changed his mind when he realized those policies were failing to change China’s policies. His book recounting policy mistakes caught the attention of the Trump White House. He told a C-Span audience he regretted all the bad advice he had given to presidents.

When a caller objected to Pillsbury’s unserious approach to critical national security concerns, he said she shouldn’t believe him now because he could change his mind again. It appears that he has — or that he never changed it in the first place — and that this president now is the recipient of the resuscitated bad advice.

Beijing may be glad to have the earlier Pillsbury back, but U.S. national security would benefit from Trump’s return to the core principles that guided his original instincts toward China and North Korea. Before defeat gets snatched from the jaws of victory, let Trump be Trump.