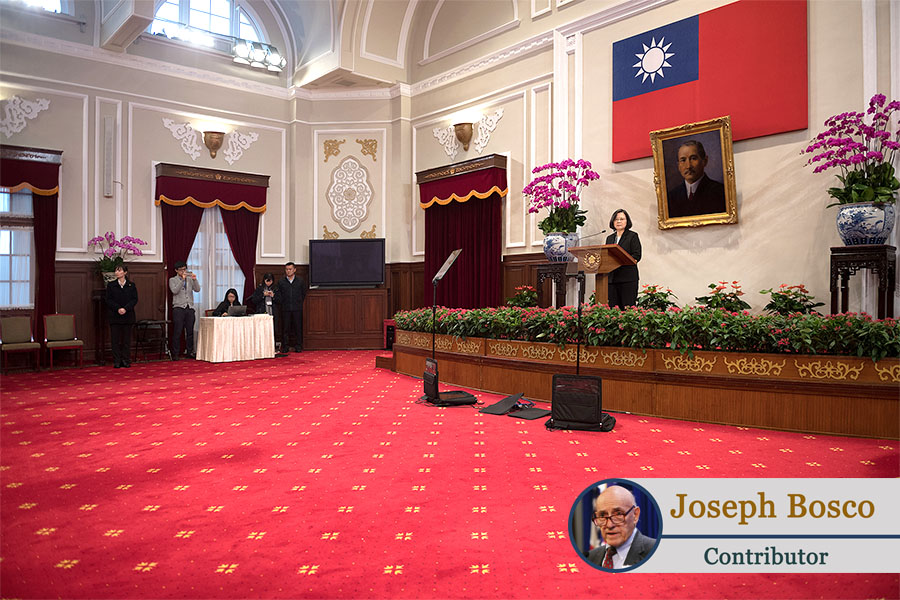 Year of Decision for Trump and Xi on Taiwan

◎ Of the many foreign policy challenges confronting President Trump in 2019, ensuring the democratic security of Taiwan may prove as daunting, and as dangerous, as resolving the North Korea nuclear crisis.

Of the many foreign policy challenges confronting President Trump in 2019, ensuring the democratic security of Taiwan may prove as daunting, and as dangerous, as resolving the North Korea nuclear crisis.

That is because by the end of 2018, America’s commitment to Taiwan was put under a partial cloud after a series of calculated moves by China — and an ill-considered one by the United States.

China’s financial pressures to increase Taiwan’s diplomatic isolation.
Beijing continues to be effective in excluding Taiwan from international organizations where it is uniquely qualified to make significant contributions, such as the World Health Organization. It also succeeded in bribing three other economically stressed countries to sever diplomatic ties with Taipei this year, advancing China’s goal of delegitimizing Taiwan as a political entity. The United States was unable to head off the adverse decisions by the Dominican Republic, Burkina Faso and El Salvador, but it has imposed diplomatic penalties hoping to forestall further erosion among the remaining two dozen states recognizing Taiwan.

China’s interference in Taiwan’s democracy.
Leading up to Taiwan’s municipal elections and referenda in November, Beijing conducted a vigorous campaign of disinformation to oppose the candidates and positions proposed by the party of President Tsai Ing-wen, Beijing’s anti-unification nemesis. It is not clear whether China’s efforts directly caused the results that seriously damaged Taiwan’s political fortunes and those of the Democratic Progressive Party.

But the perception of effective Chinese election interference has sown considerable disarray and confusion in Taiwan’s body politic and encouraged China’s Communist Party to meddle even more vigorously in Taiwan’s presidential election in 2020. It is conceivable that its illegal electoral manipulation could elect a Taipei government more favorable to Beijing and much cooler to close U.S.-Taiwan relations, positions opposed by a majority of the Taiwanese. Such an outcome could lead to civil unrest, which China’s Anti-Secession Law lists as one of the conditions justifying Chinese military action.

China’s expanded military threats against Taiwan.
Throughout 2018, Beijing conducted a range of provocative naval and air operationssimulating attacks on Taiwan and clearly intended to signal preparation for the real thing. These were accompanied by orchestrated public statements calling on the People’s Liberation Army (PLA) to be ready for actual combat across the Taiwan Strait.

China’s renewed direct threat against the United States.
Every decade or so, a leading Chinese official or military officer makes a chillingly barbaric statement warning America of the dire consequences of intervening in a China-Taiwan conflict.

Last month, in the latest threat of mass killings emanating from Beijing, Rear Admiral Lou Yuan said the PLA Navy was prepared to sink American aircraft carriers operating in the East and South China Seas and presumably the Taiwan Strait.

Why do Chinese leaders permit, and even encourage, such brutal threats against the world’s leading military superpower knowing that America’s retaliation would be swift, certain and totally devastating for China, wiping out all the economic and diplomatic gains of the past four decades?

Since China’s leaders are universally judged to be non-suicidal, the answer must be that they don’t expect to ever have to carry out their dire threats. Instead, they expect the United States to back down and stay out of any actual cross-Strait conflict. Again, why would Beijing make that critical, and highly risky, assumption?

Because they see the risk diminishing as they close the military capabilities gap with the United States — and because Washington has never repudiated its own formula for deciding whether to intervene to defend Taiwan: “It would depend on the circumstances.”

That was the answer Assistant Defense Secretary Joseph Nye gave to bluntly inquiring Chinese defense officials during the 1995-1996 missile crisis. No U.S. administration since then has seen fit to disabuse Beijing of the idea that under the “right” circumstances, America would stand by as China attacked Taiwan. Lou Yuan seems confident that China’s fleet of attack submarines and arsenal of anti-ship ballistic missiles have created the circumstances that make such an attack a relatively low-risk undertaking.

That is the dangerous legacy that its predecessors have left the Trump administration in the U.S.-China relationship. The president and his national security team have taken a number of laudable steps to affirm the U.S.-Taiwan relationship, but the ultimate deterrence gap remains.

Worse, it has seriously deepened after the president’s precipitous decision to withdraw U.S. forces from Syria. If the often-abandoned Kurds could be so unceremoniously abandoned again, Chinese strategic planners must be asking, “Why wouldn’t Washington forsake Taiwan (again) when the price for defending it appears so much higher?”

2019 is the year of decision on Taiwan for both Washington and Beijing. President Trump can go a long way in undoing the strategic damage caused by the Syria decision. First, for Syria, Taiwan, and the Mideast and East Asia regions, he should reverse it.

Then he should choose among his many options to restore/create credibility in America’s commitment to Taiwan’s democratic security by declaring unequivocally that we will help defend Taiwan under all circumstances. He could do so in a message from the Oval Office, a tweet, or a phone call to President Tsai. Or, perhaps by a visit to Taiwan from Vice President Mike Pence or Secretary of State Mike Pompeo.

As for the effect on current trade talks, Beijing has no reluctance to compartmentalize issues when it chooses, or to engage in cross-provocation when convenient. This U.S. administration can be equally adept at exercising cross-deterrence. (Syria is the opposite.) Whatever short-term disruption on trade a bold Trump move on Taiwan would cause, it would prove salutary across the board in the long run.