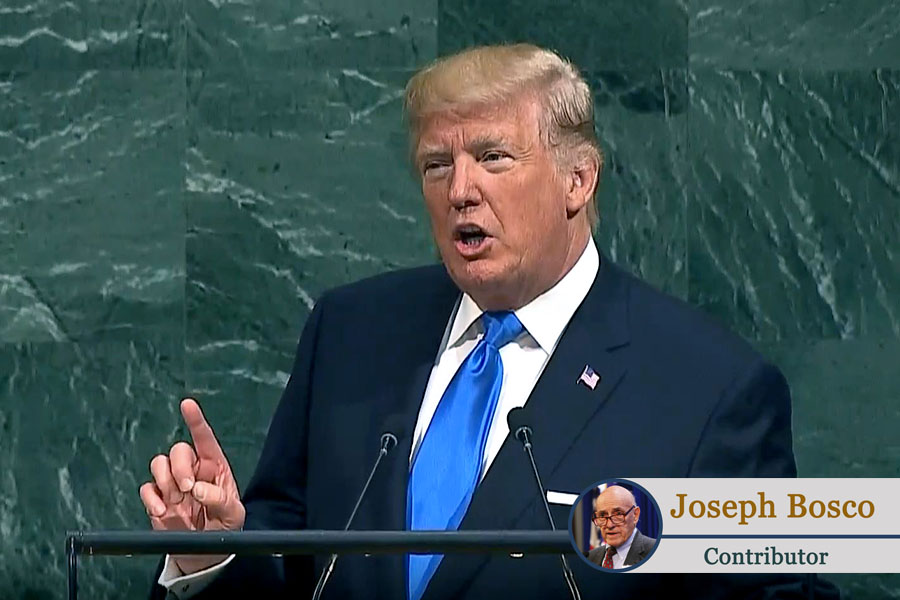 ◎ The United States and other countries in the West no longer can avoid joining the cold war that China has been waging unilaterally for the entire 40-year period of engagement.

World, we have a problem. Though governments and populations would prefer to deny it, the reality is that we have entered a new cold war, and it threatens to end more violently than the last one.

Expressed more accurately, the United States and other countries in the West no longer can avoid joining the cold war that China has been waging unilaterally for the entire 40-year period of engagement.

Put another way, the anti-Western policies of the Chinese Communist Party that began under Mao Zedong during the original Cold War period have never abated. Instead, they have been disguised or modulated for pragmatic tactical reasons from time to time. “Hide your capabilities, bide your time” was Deng Xiaoping’s formula for deceiving the West regarding Beijing’s true intentions.

Now the mask is off and the face of communist rule in China and toward ts neighbors is being revealed in all its ugly features. Nor can non-Western countries opt out of the confrontation by dismissing it as a narrow, two-sided East-West conflict that does not involve them. Where is their anger, for example, when millions of Muslims are brutally suppressed and de-Islamicized in Chinese-occupied East Turkestan?

Beijing is an equal-opportunity oppressor: Buddhists and other Tibetans, Christians, Falun Gong are persecuted, imprisoned, have their organs removed, killed because they believe in something not dictated by the anti-religious Marxist-Leninist ideology. The same inhuman treatment is accorded dissidents who espouse the human rights guaranteed by China’s constitution, the Universal Declaration of Human Rights, and the International Covenant on Civil and Political Rights. And to Chinese lawyers who seek to enforce those rights under a rule of law and impartial justice.

Since 1949, China’s communist government has followed the same path of tyranny against its own people that Stalin’s Soviet Union, Hitler’s Germany, and North Korea’s Kim dynasty imposed on their helpless populations. And it was Mao Zedong who succinctly stated the common approach that defines all those dictators and mass murderers: “Political power grows out of the barrel of a gun.”

Also like those past and present tyrants, today’s China turns its anti-human wrath against its neighbors and other countries and openly threatens world peace. Having joined North Korea in its invasion of South Korea, and seized and occupied Tibet and East Turkestan, Beijing nakedly states its intention to absorb Taiwan and the entire South China Sea.

To deter defensive intervention by the United States, the only power capable of stopping Asia’s latest communist aggression, China threatens to obliterate Los Angeles and hundreds of other cities and to sink U.S. aircraft carriers for the purpose of killing thousands of Americans and frightening 300 million others. How poorly they understand the American people and our capacity to respond to aggression.

But reacting after the fact will not avoid catastrophe. Monstrous regimes in the past century also issued their blood-curdling warnings before actually carrying them out. The world stood by and watched passively as the Nazis and Imperialist Japanese prepared for war — and then was shocked when suddenly it was upon us.

There is virtually no international norm the Chinese communists have not violated or threatened to violate. The danger is evident everywhere, and in their very words, no longer can be ignored.

The challenge requires the concerted moral, diplomatic and economic force of all freedom-loving peoples to join with the United States, bilaterally and multilaterally, in sending a clear message of deterrence to Beijing.

The effort should be reinforced in the United Nations, whose charter prohibits the use or threat of force except in individual or collective-self defense and codifies the human rights that China routinely suppresses.

With the veto power wielded by China and Russia, another international aggressor and human rights violator, the U.N. Security Council will be unable to act — though even a vetoed resolution will send a moral and political message.

But the heavy lifting will have to be carried out in the U.N. General Assembly through a Uniting for Peace resolution such as that employed in 1950 to resist North Korean and Chinese aggression after the Security Council was paralyzed by communist vetoes.

Unlike in the council, any country in the General Assembly, however small, can take the lead in confronting the global danger, and all will have a voice and a vote. Time is running out, history is on the verge of repeating itself; if inaction prevails, humanity will pay the terrible price.