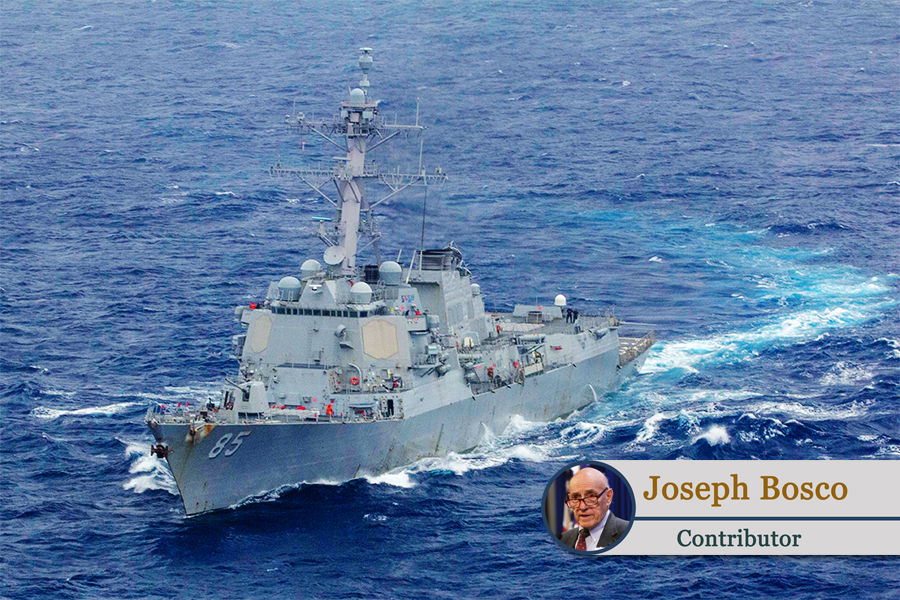 ◎ There has been much talk about the recent comments of a Chinese military official issuing a dire warning against the United States resisting China’s aggression in the region.

There has been much talk about the recent comments of a Chinese military official issuing a dire warning against the United States resisting China’s aggression in the region. Rear Admiral Luo Yuan said if it sank a U.S. aircraft carrier or two, with the loss of up to 10,000 lives, “We’ll see how frightened America is.”

He was referring specifically to the South China Sea, but Chinese generals have made similar murderous threats about U.S. intervention in a conflict with Taiwan.

The January 19, 2019 issue of The Guardian carried an article entitled “Xi Jinping challenges Donald Trump over Taiwan” quoting Chinese officials who saw the 1995-96 Taiwan Strait missile crisis as the time Beijing decided that the ability to destroy U.S. Navy ships was the key to seizing Taiwan:

“The aim was to ensure that the PLA air, land, space, cyber and sea forces acting in unison had the capability to sink two carrier fleets … Once such a capacity got acquired, the generals in Beijing believed that Washington would not dare to intervene on the side of Taipei. (my emphasis)”

American officials also saw the 1995-96 events as significant—and worrisome. One Asian affairs veteran of the Clinton administration called it “our own Cuban missile crisis—we had peered into the abyss.” It is worth recounting how the situation unfolded.

An alumnus of Cornell University, he was invited to attend his reunion the previous July. China strongly objected to the U.S. visit of such a high-level Taiwan official and Secretary of State Warren Cristopher, sensitive to Chinese concerns, assured Beijing that Lee would not be granted a visa.

But the uproar from American friends of Taiwan, particularly in Congress, caused the Clinton administration to reverse itself, Lee’s visa was granted, he gave his speech in Ithaca, and Beijing went ballistic, literally. It fired missiles across the Taiwan Strait and conducted live-fire exercises, closing the shipping lanes, disrupting air and maritime commerce, and sending insurance rates soaring.

President Clinton, unsure of how far China would go, deployed the USS Nimitz aircraft battle group into the Taiwan Strait to deter any Chinese escalation. This was the first time the United States Navy had entered the Strait since President Richard Nixon pulled the Seventh Fleet out in 1972 as a goodwill gesture prior to his historic visit to China.

Beijing saw the move as adding injury to insult and protested vehemently to Washington at this violation of what they considered Chinese waters. The Clinton administration quickly offered the Chinese an “explanation” of the transit: bad weather had caused a diversion of the ships into the Strait.

China took this as an implied admission by the U.S. government that Strait transits could only be made with Beijing’s prior permission. That gave it reason to question how seriously Washington was committed to defending Taiwan. Was this a one-off, purely symbolic U.S. gesture, unlikely to lead to follow-up action?

So, they decided to confront the issue directly with their American counterparts.  In a December 1995 meeting with Assistant Secretary of Defense Joseph Nye, they asked him point-blank what Washington would do if China outright attacked Taiwan. Nye gave this answer: “We don’t know and you don’t know.  It would depend on the circumstances.”

(When asked later why he had given such an equivocal response, Nye said he wanted to avoid a replay of the situation that led to the Korean War after U.S. officials indicated America would not defend South Korea.)

Beijing decided it needed to test Nye’s strategic ambiguity doctrine, and as Taiwan’s election approached, it again began firing missiles across the Strait, this time straddling both sides of the island. A PLA general also issued a blunt warning against American reaction: “You care more about Los Angeles than Taiwan.”

The Clinton administration also upped the ante, now sending two carriers and accompanying ships toward Taiwan. But this time, Beijing threatened a fierce response: if the U.S. Navy entered the Strait, it would face a “sea of fire.” Washington turned the ships around.

Both sides took lessons from the episode. America kept its Navy out of the Strait for the next decade—until Defense Secretary Rumsfeld directed the Navy to resume normal operations. But U.S. capabilities were not matched by clear U.S. will, so China kept building its naval, air, and cyber forces—the new “circumstances” Washington must now confront in deciding whether to defend Taiwan.

1. What if, after Beijing protested the Nimitz passage through the Strait, Washington had responded the way Pacific Commander Timothy Keating did when China angrily objected to the Kitty Hawk’s transit in 2007: “We don’t need China’s permission to go through the Taiwan Strait. It’s international waters. We will exercise our free right of passage whenever and wherever we choose, as we have done repeatedly in the past and we’ll do in the future.”

2. What if, when the Chinese military officers confronted Mr. Nye, he had invoked the Taiwan Relations Act, said Taiwan’s security is in the U.S. national interest and we will defend it under all circumstances?

3. What if, when Beijing threatened a “sea of fire,” Clinton had called its bluff and sent the two carriers into the Strait?

Those questions about China’s state of mind then, and how its strategic thinking might have changed by a clear and firm U.S. posture, may never be fully answered. But the question the Chinese asked about American intentions must be answered, definitively and soon, before Beijing makes a fatal strategic miscalculation and we end up blundering into the very war Nye’s strategic ambiguity was intended to avoid.

Yet, since the 1995/96 crisis, no subsequent U.S. administration has chosen to correct the fatally-flawed Nye formulation of U.S. intentions. President George W. Bush briefly attempted clarification when a journalist asked him the same question shortly after he took office in 2001: what would the U.S. do to defend Taiwan against a Chinese attack? He answered, “Whatever it took.”

Shocked U.S. officials, supported by academic and think tank experts quickly got the administration to “clarify” that nothing had changed. A similar reaction occurred when President Trump took a congratulatory call from President Tsai Ing-wen and said he didn’t feel bound by the one-China policy.

It is time for a new presidential clarification to remove any doubt from the minds of Xi Jinping and his colleagues: Washington will intervene on Taiwan’s side against any form of Chinese Communist aggression. Otherwise, American strategic ambiguity seems certain to lead to Chinese strategic miscalculation.