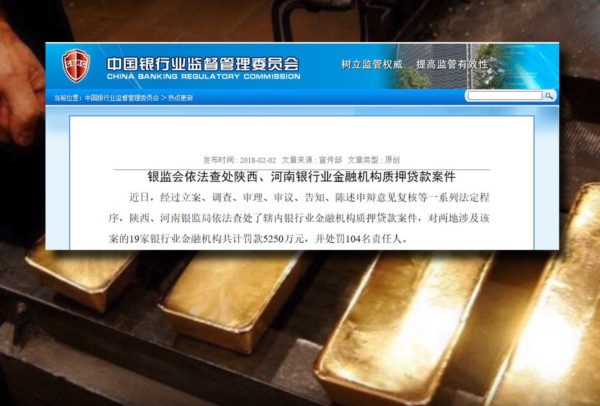 ◎ The loan fraud scandal is revealing of the messy internal controls in China’s banking and financial sector.

On Feb. 2, the China Banking Regulatory Commission (CBRC) announced the outcome of an infamous pledged loan fraud in 2016 that involved 19 banks in the provinces of Shaanxi and Henan. The guilty banks were fined 52.5 million yuan (about $8.3 million) and 104 bank staff were prosecuted. This is the third major violations case handled by the CBRC in 2018.

The backdrop: On May 2016, 19 banks in Shaanxi and Henan were found to have illegally obtained 190 billion yuan in loans by pledging gold of low purity.

The “fake gold” used by the criminals were about 62 percent tungsten and 38 percent gold. Regular gold purity machines were unable to tell the difference between the fake gold and real gold because pure gold was used to encase the tungsten core.

Why it matters: The loan fraud scandal is revealing of the messy internal controls in China’s banking and financial sector.

Our take: China’s financial sector has been a mess for a while, and cases like the 2016 gold loan fraud are not unusual given the precedence of banks selling gold that rusts. The widespread fraud and corruption engendered by the Chinese Communist Party system has eroded the basis of trust in Chinese society.

The CBRC’s stringent supervision will undoubtedly turn up more scandalous financial fraud cases. We believe, however, that what the Chinese authorities reveal to the public will only be a fraction of what is really going on in China’s financial sector.