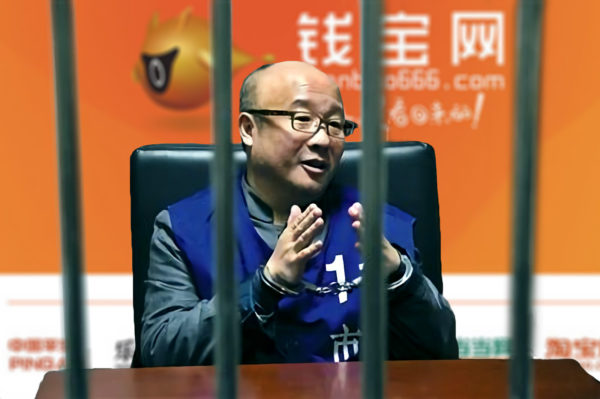 On Jan. 23, hundreds of users of Qianbao.com, a fraudulent investment firm, petitioned the Jiangsu provincial government to resolve the collapsed Ponzi scheme. The Nanjing police later dispersed the protesters. Qianbao had 200 million registered users in 2017.

Many Qianbao users began protesting after founder Zhang Xiaolei surrendered to the Nanjing authorities on Dec. 26, 2017. The Qianbao scam involved sums of over 70 billion yuan (about $11 billion), or more money than the notorious Ezubo online lending case (50 billion yuan). Since the scandal broke, Qianbao still has 30 billion yuan in outstanding payments to make to its users.

Among the protesters are a sizeable group of “Qianbao fans,” a term coined by mainland Chinese media to describe loyal Qianbao users who refuse to believe that Zhang Xiaolei had entrapped them in a Ponzi scheme. Other users hope that the authorities dismiss the case and release Zhang so they may recover their investments; should Zhang be found guilty and Qianbao declared to be a scam, Qianbao users will have no hope of recouping their losses.

The backdrop: Zhang Xiaolei’s first brush with the law was in 2003 when he was imprisoned for embezzling millions from investors in his company, which sent Chinese teenagers to a South American soccer club for training. He eventually posted bail and paid his investors.

In 2012 (or 2010 in some accounts), Zhang founded Qianbao.com, an internet wealth management product that promised users high annualized returns of between 40 to 60 percent. In 2014, mainland Chinese media suspected Qianbao of being a Ponzi scheme, but the company owed no outstanding payments in its first five years of operation.

Qianbao grew in popularity by promising users high returns and bonuses while appearing to deliver on payments. Industry analysts later say that Qianbao’s later interest payments to users were only good on paper. Founder Zhang Xiaolei also acquired a considerable number of affiliate companies and invited users to become “partners” with the promise of even bigger returns. Zhang then created a vast, illusionary business network to support his scam, and successfully converted many users into firm loyalists who would go on to recruit more Qianbao users.

Before Qianbao was outed as a Ponzi scheme in 2017, Zhang served as the legal representative of 72 companies that are mainly from the software and IT industry. Zhang himself invested 44.55 million yuan in 54 of the 72 companies. Thus far, 30 of the companies have wound up, while the remaining 42 are at risk of shutting.

The Nanjing authorities have been on alert since the Ezubo scandal in 2015, and they pressured Qianbao to leave the city. In 2016, Qianbao moved its headquarters to Shanghai. When the Shanghai authorities came knocking, Zhang moved Qianbao’s HQ to Chengdu.

Our take:
1. Massive financial fraud in the private sector is inseparable from the culture of corruption engendered by the Chinese Communist Party (CCP). Many illegal funds were able to become giant Ponzi schemes overtime because they had the backing of local officials. When these fraudulent companies start encountering trouble, local governments would find ways to either cover-up the scandal or disassociate themselves with the lawbreakers. The local authorities are least concerned with public interests—not an unusual phenomenon in a regime where officials do not run for elections but are appointed by the central government. The Nanjing government chasing Qibao out of its city and clamping down on protesters is a case in point.

Given that personnel is the cause of financial problems, Xi Jinping’s best option to mitigate risks lies in his anti-corruption campaign. The abrupt resignation of 53-year-old Nanjing mayor Miao Ruilin on Jan. 19 is perhaps linked with the Qianbao case.

2. Scams like Qianbao and Ezubo can flourish in part due to declining societal morals, a by-product of the culture of corruption fostered under CCP rule. “Get-rich-quick” schemes are thus becoming more popular and prevalent in China as people eschew enterprises that contribute to the real economy or working in manufacturing over founding “innovative” Ponzi schemes.