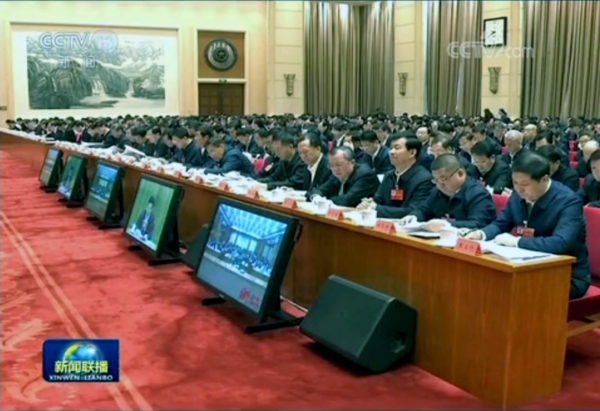 ◎ The Xi administration considers financial affairs and risks to be a matter of national security.

The Central Political and Legal Affairs Commission (PLAC) stressed the need for “vigorous” safeguards against financial risks during a work conference held in Beijing from Jan. 22 to Jan. 23. Domestic security officials were told to carry out “stability maintenance”—Communist Party parlance for repressive law enforcement measures—in cases of “economic crime” involving masses of people.

Instructions from Xi Jinping were also broadcast during the meeting.

The backdrop: China’s legal and law enforcement apparatus has increasingly been involved in financial affairs and meetings since 2017.

On Aug. 4, the Supreme People’s Court issued a circular on “strengthening financial adjudication work” that provided guidelines on the legal handling of financial cases. Judges were required to take strong measures against those who committed internet financial crimes or other internet related illegal financial activity. Judges also had to guard against the transmission of financial risks that may result from bankruptcy cases.

On Aug. 22, the Supreme People’s Procuratorate issued a circular on learning from the National Financial Work Conference in July and improving financial prosecution work. Procuratorates were required to investigate and handle “financial crocodiles” (large Chinese conglomerates who go on investment sprees abroad) and deal with “moles” who trade money for power. Procuratorates were also told to crackdown on “innovative” investors who run Ponzi schemes and investigate crimes that could shake up the financial sector.

Why it matters: The Xi administration considers financial affairs and risks to be a matter of national security. In other words, the CCP believes financial issues to be directly connected with its political legitimacy.

Our take:
1. The PLAC emphasizing the need to curb financial risks suggests that the Xi leadership is making preparations for the worst-case scenario. For instance, a debt crisis could be triggered in China if substantial investments return to the West. In this scenario, the CCP will need its domestic legal and security officials to “maintain social stability.”

On Jan. 10 2016, over 100,000 people who invested in the Ezubo online lending scam journeyed to Beijing to submit petitions. Local security officials struggled to handle this mass petition. The Ezubo scam involved over 900,000 people.

Ever since the Qianbao.com Ponzi scheme was exposed in 2017, hundreds of protesters have taken to the streets to demand a solution from the authorities. Clips of policemen grappling with masses of Qianbao protesters have surfaced on social media. Qianbao had 200 million users in 2017.