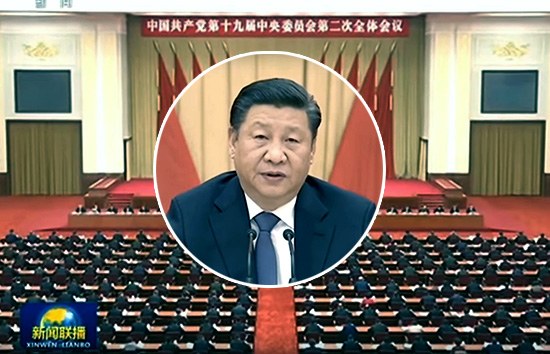 ◎ The second plenum of the 19th Central Committee represents a break with the past in three ways.

On Jan. 19, the Chinese Communist Party 19th Central Committee concluded its two-day Second Plenary Session. The 204-member elite body passed a proposal to amend the Chinese constitution and added Xi Jinping’s political thought to it, as well as confirmed the establishment of a National Supervisory Commission, a state-run anti-corruption body.

The backdrop:
1. The second plenum of the 19th Central Committee represents a break with the past in three ways:

2. In previous second plenums, the Central Committee usually deliberate the list of candidates for top state offices when appointments are made at the Two Sessions in March. Some of the key offices that need filling at this year’s Two Sessions include Chinese president and vice president, State Council premier and vice premiers, state Central Military Commission chairman and vice chairs, as well as the heads of the Supreme People’s Court, Supreme People’s Procuratorate, and the National Supervisory Commission.

The CCP usually amends the state constitution following a power shift in its leadership or to preserve its rule when faced with a crisis (new political theories are crafted to shift the goalposts of the impending communist “utopia” and delay the expectations of the masses). Party leaders who amend the constitution are also signaling their power consolidation.

2. With “Xi Jinping Thought” written into the Party charter and the Chinese constitution, Xi has paved the way for himself to take the step in political reform.

4. If the candidates for the State Council, Chinese legislature, and political consultative body weren’t deliberated during the second plenum, the Central Committee might hold a third plenum at the end of February before the Two Sessions commence in March. And if there is a third plenum this year, the 19th Central Committee could hold an unprecedented eighth plenum four years from now (Central Committees usually convene only seven plenary sessions).