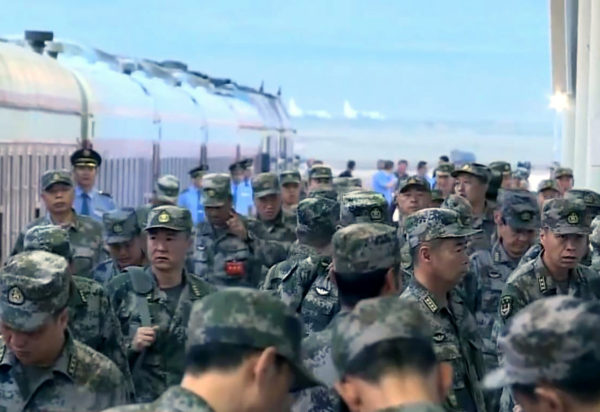 ◎ Xi could have implemented the border-interior swap move as a precautionary measure against potential military coups.

According to a People’s Liberation Army Daily report on Dec. 9, over a hundred division-level officers from interior units were dispatched to similar positions in units along the Chinese border, islands, and plateaus for “training.” Concurrently, the division-level officers at the border and far-flung regions where reassigned to the interior units.

The report also noted that combat officers and those in the military academies would too be made to exchange positions.

The backdrop: The border-interior military personnel swap follows another drastic move earlier this year. In April, the 18 army groups were cut to 13 and given new unit numbers. All army group commanders and political commissars were reshuffled, along with 90 percent of each army group’s leadership cohort. The army group leading officers were given only 24 hours to take up their new post after receiving the orders.

The PLA’s units now more closely resemble the American military in organization following Xi’s military reforms. For instance, PLA units are organized around brigade combat teams instead of divisions. Also, the leadership cohort of 40 percent of the brigades and 50 percent of the various military academies and research facilities have been reshuffled.

Why it matters: The latest military personnel movement is the first large-scale reshuffle since the 19th Party Congress in October. Before the 19th Congress, Chief of Joint Staff Fang Fenghui and Political Work Department director Zhang Yang were suddenly replaced and stopped making public appearances. We wrote in September that Fang and Zhang could be involved in a failed coup against the Xi Jinping administration.

State media recently announced that Zhang had hung himself while he was being investigated for his links with former military vice chairs Xu Caihou and Guo Boxiong.

Our take:
1. Xi could have implemented the border-interior swap move as a precautionary measure against potential military coups. The division-level officials at the borders may not be acquainted with powerful political backers or have factional allegiances, and will most likely be supportive of Xi’s military reforms at their interior posting.

2. The troops and their new commanders will require some time to get familiar with each other following the border-interior swap. During this familiarizing period, the commanders will find it difficult to launch a coup, should they have the ambition.