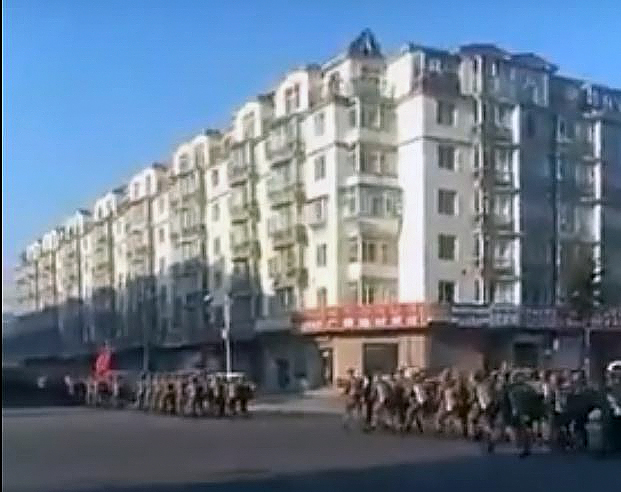 ◎ Given the very tense North Korean situation, Chinese citizens along the Sino-North Korean border are paying closer attention to military activity in their area.

On Dec. 7, a Chinese Twitter user uploaded a 38-second clip showing rows of People’s Liberation Army (PLA) troops marching through the streets of an unidentified city in Jilin, a province that borders North Korea. It is unclear when precisely the clip was filmed.

The clip showed at least one company worth of troops carrying full backpacks marching and singing while in formation. Towards the end of the clip, a soldier dashed up to the person filming the march and told him to stop recording.

Why it matters: Given the very tense North Korean situation, Chinese citizens along the Sino-North Korean border are paying closer attention to military activity in their area.

Our take:
1. An analysis of the details in the film indicates that it was shot in Jilin’s Hunchun City. The troops in the video clip are most likely from the nearby 329th infantry border brigade.

2. The marching in formation and singing suggests that the border unit was likely participating in a regular drill.

3. It is unclear if the road march is connected with the latest developments in North Korea.

Observers are concerned that war might break out on the Korean Peninsula over the North Korean issue.