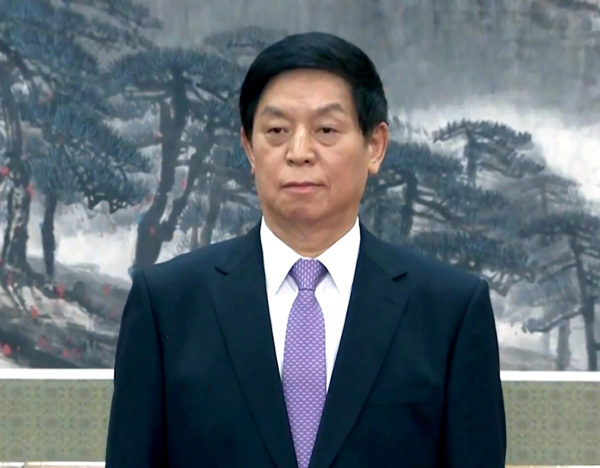 Some observers have interpreted Li’s meeting attendance as an indication that he will head the Chinese People’s Political Consultative Conference (CPPCC) come the Two Sessions meeting in March. This is because former CPPCC head Yu Zhengsheng attended the previous meeting in 2012.

There is also some speculation that Wang Yang, who should be the next CPPCC head given his Politburo Standing Committee rank, could instead head the National People’s Congress (NPC) or become State Council Premier.

Our take:
1. Li Zhanshu was the third person to walk out on stage at the unveiling of the new Politburo Standing Committee at the conclusion of the 19th Central Committee’s First Plenum, which indicates he is the third-rank official in the CCP. Going by earlier Politburo Standing Committee configurations, the top four ranking officials are usually arranged by the importance of their post. The other positions are determined by both political qualifications and the importance of the post.

2. While Wang Yang has better qualifications and is more experienced than Li (Wang was a Politburo member of the 17th and 18th Central Committee), he is still ranked behind Li in the Politburo Standing Committee. Unless Xi Jinping is abandoning precedent, then it is unlikely that Wang will become the NPC chief and Li the CPPCC head because the NPC position is more prestigious and should go to the higher ranking official.

3. The scenario where Wang becomes premier, Li Zhanshu becomes the CPPCC chairman, and Li Keqiang heads the NPC is very unlikely. While it is plausible for Li Keqiang to become the NPC head given the precedent of no. 2 officials in that role, there is no precedent for the no. 4 official in the Standing Committee becoming premier.

More importantly, Li Keqiang has already served five years as premier and hasn’t made any serious mistakes that warrant his replacement.

4. We believe that the Politburo Standing Committee members will be take up the posts that we earlier forecasted. (See table below.)