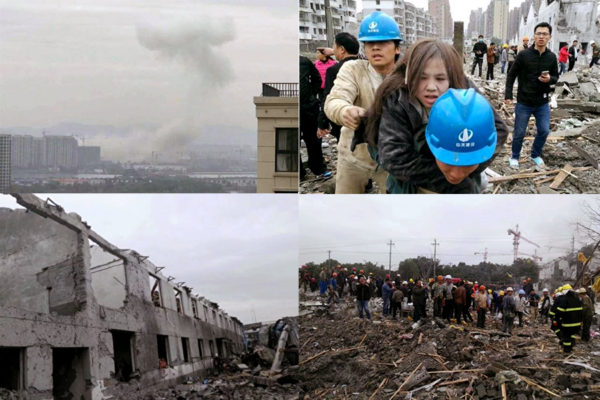 ◎ The Ningbo explosion will likely be considered a severe safety accident, and will affect all officials in charge of safety from the district up to the provincial level.

At about 8:55 a.m. on Nov. 26, a massive explosion broke out at Lijiang West Road in Ningbo City’s Jiangbei District. Ningbo is in Zhejiang, a province on China’s east coast.

Pictures on Chinese social media show a mini mushroom-shaped cloud looming over the blast site. Other photos reveal razed homes and a ruinous landscape. Eyewitnesses heard a loud bang and felt a tremor around the time of the explosion, and described desperate scenes at its epicenter. At least two persons were killed, and nearly a hundred were injured, according to news reports.

Other reports note that the blast’s shockwave was so powerful that the windows of nearby buildings shattered, metal roll-up doors warped, and vehicles sustained heavy damage. Residents suspect a natural gas explosion, but the local natural gas company has denied this.

During a press conference held that afternoon, local Ningbo officials say that the explosion’s epicenter was an unpopulated area that was scheduled for demolition. But from video clips on Chinese social media reveal shocking scenes of devastation and badly wounded people being stretchered away.

Why it matters: The Ningbo explosion will likely be considered a severe safety accident, and will affect all officials in charge of safety from the district up to the provincial level.

Some officials could even be punished. For example, fourteen Qingdao officials were disciplined following a November 2013 oil pipeline explosion in the city that resulted in 62 deaths and 136 injured.