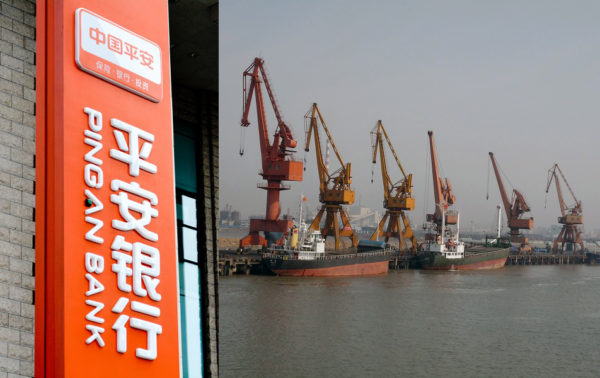 ◎ The break out of debt defaulting among Chinese companies is one of the negative outcomes of China’s deteriorating economy.

Following Dandong Port Group Co.’s default of a 1 billion ($151 million) bond in late October, China Ping An Bank was found to be one of the port’s creditor banks. This marks the fourth time in two years that Ping An is providing credit to troubled businesses. So contrary to its name, Ping An (“safe and sound”) is currently not at all in a safe position.

As of the end of June 2017, 19 banks extended to Dandong Port a total line of credit worth 34.6 billion yuan, of which 2 billion yuan came from Ping An Bank.

Ping An Bank was recently found to be involved in financing several Chinese companies that are in debt crisis:

1. At the start of the year China Huishan Dairy Holdings Co. Ltd was found to have net liabilities of over 10 billion yuan. On March 24, Huishan’s stock value fell by 85 percent in a single day.

According to a Ping An Bank announcement, Guanfeng Co. Ltd, Huishan’s controlling shareholder, owed the banks 1.8 billion yuan to as of March 24. Ping An also holds 3.4 billion Huishan shares as pledged assets.

Huishan’s debt and pledged assets, however, could become toxic. On Nov. 16, Huishan announced that it was preparing the company for provisional liquidation, and that its net liabilities as of March 2017 “could have been” 10.5 billion yuan.

2. In March 2016, Dongbei Special Steel Group Co., Ltd became the first regional state-owned enterprise to default its bonds with an announcement that it couldn’t return investors their principal on the maturity date.

3. In February 2016, Shanghai Yunfeng Group, an energy company, defaulted on its private equities and incurred an outstanding balance of 6.6 billion yuan.

The big picture: A July 4 report on financial stability noted that some businesses were keeping afloat through taking on new debt to finance old debt, resulting in increased risks to non-financial firms. The report also stated that malicious debt evasion occurs in some areas of China.

1. The break out of debt defaulting among Chinese companies is one of the negative outcomes of China’s deteriorating economy.

During Jiang Zemin’s era of dominance (1997-2012), a region’s ability to attain high GDP growth figures was an important determining factor for whether or not Chinese officials could be promoted. In the quest for GDP growth, many local officials invested heavily in developing a so-called “reinforced concrete” economy (or over-investment in fixed assets), and sought avenues to profit from corruption while pursuing economic results.

China’s debt problems began to worsen during the 2008 global financial crisis when local governments were allowed to take on debt. By the end of 2016, China’s total debt liabilities had risen to 185 million yuan, or four times the earlier level.

2. The Jiang faction and other Chinese Communist Party influentials have long dominated China’s financial sector. They were able to generate huge profits for themselves by implementing favorable policy and having an information advantage over regular investors. Their gains, however, came at the expense of the real economy; low-end manufacturing in particular found it harder and harder to stay in business. Eventually, China’s banks will have to bear the immense debt of China’s failing enterprises—a problem that Xi Jinping wants but hasn’t been able to resolve.

3. We believe that Xi will stamp out corruption in the financial sector to mitigate financial risks.