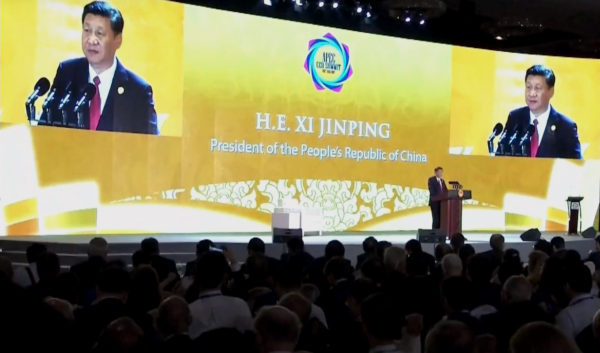 ◎ If Xi can make the free-trade ports genuinely free zones, they would pose a challenge to the CCP dictatorship.

During the 2017 APEC CEO Summit in Vietnam on Nov. 10, Xi Jinping promised to treat equally all businesses registered in China. He also discussed the need to give free-trade zones greater autonomy to implement reform, and raised the possibility of establishing “free-trade ports.”

On the same day, vice premier Wang Yang echoed Xi’s points in an article for the People’s Daily on the topic of “comprehensively opening up” China.

Why it matters: In the past five years, Xi Jinping and Li Keqiang were unable to implement substantial economic reform due to interference from Jiang Zemin’s faction and Party princelings. Xi could only advance his anti-corruption campaign and reshuffle personnel, but this allowed him to more fully consolidate control over the Chinese Communist Party (CCP) at the 19th Party Congress.

Xi’s ability to push through financial reforms such as those proposed by Wang over the next five years will benchmark the degree of his power consolidation and the obedience of local officials to his commands.

The backdrop: Xi and Li faced severe resistance to their economic liberalization plans during their first term in office. For instance, Li’s efforts to establish a free trade zone in Shanghai, a stronghold of the Jiang faction, was continually hampered by local officials, according to the Hong Kong press. Li was so furious with Shanghai officials that he reportedly pounded his desk during a State Council meeting and later boycotted the opening ceremony of the Shanghai Free-trade Zone. In 2015, former Shanghai Free-trade Zone head Dai Haibo and Shanghai vice mayor Ai Baojun were arrested on corruption charges.