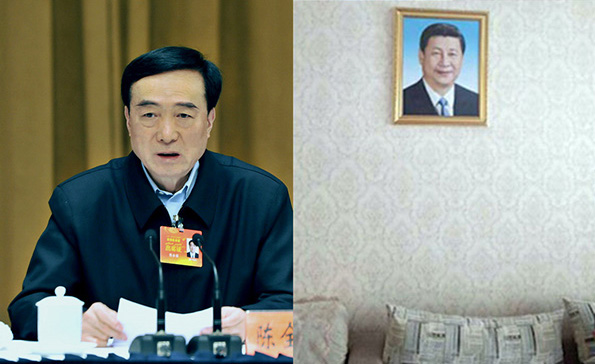 ◎ Chen Quanguo appears to be dialing up propaganda efforts with an eye on the 19th Party Congress.

Why it matters: Chen appears to be dialing up propaganda efforts with an eye on the 19th Party Congress. While Xinjiang Party secretaries usually become Politburo members, Chen might be brown nosing Xi for a bigger career advancement.

Our take: Barring unforeseen circumstances, Chen should make the Politburo. But his latest propaganda effort has complicated rather than eased his future career progression.

The Jiang faction-controlled propaganda apparatus has been flattering Xi to the point of nausea, turning popular opinion against him. For instance, when Chen was Tibet’s Party secretary last March, there was public backlash when Communist Party Tibetan delegates were seen wearing lapel pins featuring Xi to an important legislative meeting. The following month, Xi reportedly ordered the Propaganda Department to remove all adulatory images and banned them from referring to him as “Daddy Xi” in the press.

Chen’s order comes at a time when tensions between the local ethnic minorities and the Chinese authorities are intensifying, which has the effect of directing backlash at Xi. So Chen is in fact pushing against Xi with his mandate.

Chen’s career background: Chen Guoquan took over the top office in Xinjiang from Jiang faction member Zhang Chunxian in August 2017. While there has been some speculation that Chen was handed the prestigious Xinjiang position because he was once aide to premier Li Keqiang, but Chen’s promotion was in fact directed by Jiang’s right-hand man Zeng Qinghong.

Before moving to Xinjiang, Chen spent the previous five years running a suppressive reign over Tibet that resulted in over a hundred self-immolation protest incidents. In 2012, Chen also ordered Tibetan families to hang portraits of Chinese leaders in their homes prior to the 18th Congress.

Xi Jinping must have considered the ethnic tensions in Xinjiang and Chen’s history before moving him there. Consider Chen to be under Xi’s watchful eye.