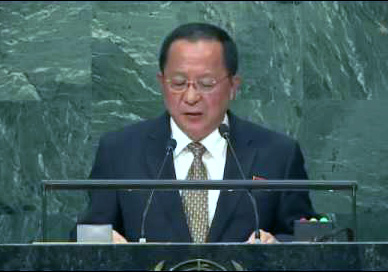 ◎ Xi’s contrasting treatment of Tillerson and Ri is consistent with his foreign policy stance.

North Korean Foreign Minister Ri Yong Ho stayed at the North Korean embassy in Beijing between Sept. 26 to Sept. 28, but no Chinese officials met with him, according to media reports. Meanwhile, Xi Jinping received United States Secretary of State Rex Tillerson in Beijing on Sept. 30.

Our take: Xi’s contrasting treatment of Tillerson and Ri is consistent with his foreign policy stance—seeking cooperation with the U.S. while distancing Beijing from Pyongyang.

Economic reasons are likely another key factor in motivating Xi to build better ties with the U.S. ahead of President Donald Trump’s China visit in November as well. The American economy has been doing well under Trump, and the Trump administration plans to cut taxes while the Federal Reserve is seeking to shrink its balance sheet. These moves will hugely impact the Chinese economy, and the Xi leadership will want to mitigate economic woes by maintaining good relations with the Trump administration.

On the other hand, North Korea’s nuclear provocations are being influenced by the Jiang Zemin political faction, who opposes Xi. Thus unlike previous Chinese leaders, Xi has been cold towards Pyongyang since taking office.