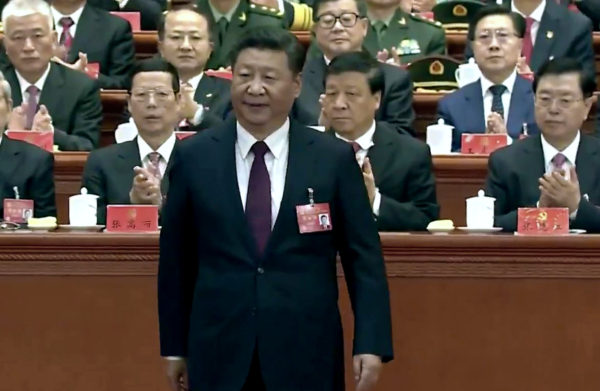 ◎ We believe that Xi will emerge from the 19th Congress as a “General Secretary Plus.”

All seven top officials made reference in their speech to, “Xi Jinping thought on socialism with Chinese characteristics in the new era.”

Our take: We anticipate that the aforementioned formulation will very likely be added to the Chinese Communist Party’s constitution.

If the formulation indeed becomes Xi’s political theory, this indicates that his political standing surpasses that of Jiang Zemin and Hu Jintao, and reaches that of Deng Xiaoping.

What’s next: Xi’s degree of power consolidation progress falls somewhere between two scenarios which we reckon to have the highest probability of occurring. (See all of our five scenarios here.)

We believe that Xi will emerge from the 19th Congress as a “General Secretary Plus,” and preside over a Politburo Standing Committee that is largely filled with trusted officials.

Wang Qishan should remain in the Politburo, but may not get a seat on its Standing Committee. However, he could become a de facto Politburo Standing Committee member if Xi appoints him to certain offices, and should continue to run Xi’s anti-corruption campaign in a different capacity.