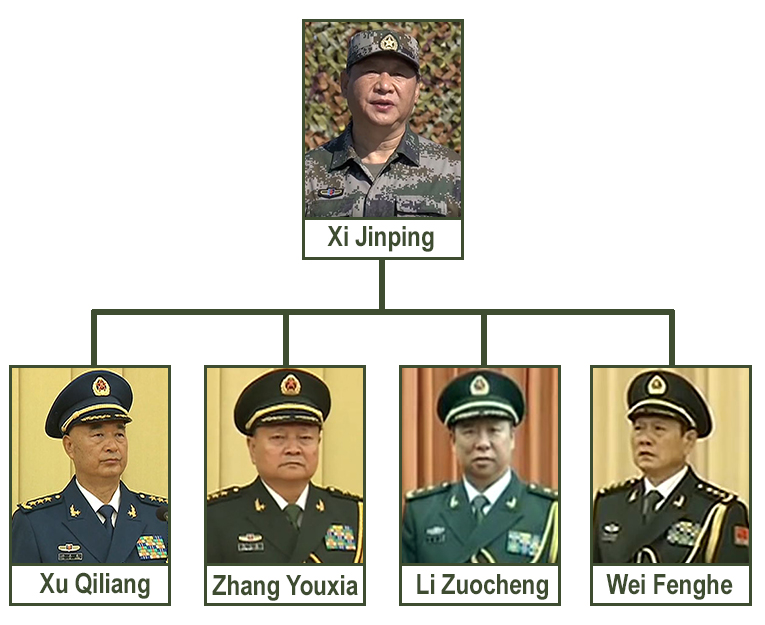 ◎ Presenting our forecast for the Central Military Command reshuffle.

Mao Zedong once quipped that “political power grows out of the barrel of a gun.” Acknowledging this symbiotic link between military and political power, the Chinese Communist Party (CCP) has always sought to keep its military under tight control.

Not surprisingly, the dialectic between military and political power became problematic in an authoritarian system that has never quite resolved its own political legitimacy. The CCP’s reliance on absolute authority to handle crises has led to a situation where Party leadership can be held hostage by those with power over the troops. For instance, as General Secretary, Hu Jintao had very little influence over military matters while Jiang’s political faction controlled the People’s Liberation Army (PLA). Consequently, Hu became little more than a figurehead.

Aware of Hu’s fate, Xi Jinping sought to purge the Jiang faction from the military ranks after taking office in 2012.

Through an anti-corruption campaign, Xu Caihou and Guo Boxiong, two military vice chairmen and Jiang faction members, were investigated on corruption charges. Xu died of bladder cancer before he could be prosecuted, while Guo was sentenced to life imprisonment. Many other Jiang faction members who held prominent posts in the military were also purged.

In 2015, Xi launched sweeping military reforms that included command restructuring and army group reorganizing. As a result of these reforms, Jiang faction networks inside in the military were cleaned out or weakened.

At the 19th Party Congress, Xi will strive to keep the military (and hence the CCP) under his thumb by appointing personnel he is more inclined to trust to China’s top military body—the Central Military Commission (CMC). Some points about the CMC of the 18th Party Congress: 3. Three guidelines for the CMC reshuffle

Xi will likely avoid appointing Generals and Lt. generals who were promoted before his tenure to the CMC. While Xi Jinping is in control of military appointments, there are still dissenting voices amongst the ranks. Thus, Xi appears to be carefully selecting personnel for the top military jobs using the following criteria: