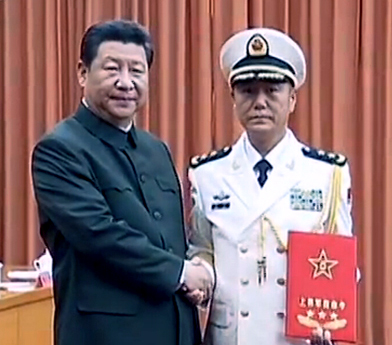 ◎ The abrupt promotion of Miao by Xi is consistent with changing personnel trends in the Chinese military.

On Sept. 8, Chinese state media started referring to Admiral Miao Hua as Political Work Department director even though there was no prior notice that incumbent director Zhang Yang was being replaced.

Context: Hong Kong newspapers reported that Zhang was being investigated for corruption two weeks ago. He is also not among the delegates invited to the 19th Party Congress on October 18.

Zhang is associated with ex-Party leader Jiang Zemin’s faction via former military vice chairs, generals Guo Boxiong and Xu Caihou. Miao is closer to Xi’s camp, having once worked with him in Fujian Province.

Why it matters: Chinese leader Xi Jinping has been purging Jiang faction elements inside the military, and promoting officials he is familiar with to key positions to consolidate his control over the military.

The abrupt promotion of Miao by Xi is consistent with changing personnel trends in the Chinese military. Meanwhile, the apparent sidelining of Zhang Yang confirms Hong Kong media reports that he is being investigated.