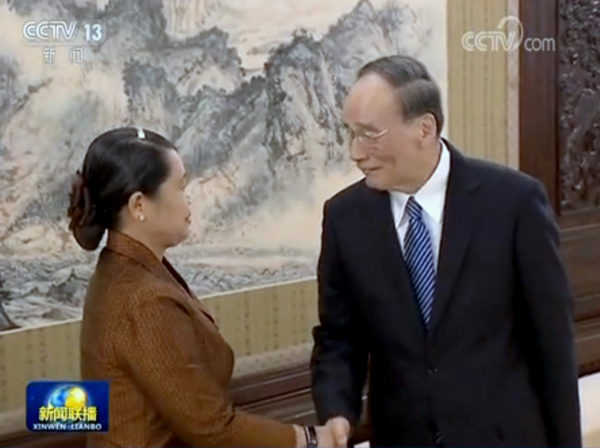 ◎ Wang’s meetings with Men, Steve Bannon, and Lee Hsien Loong were likely arranged by Xi Jinping to show those inside and outside of China that the alliance between him and Wang is still strong.

Central Commission for Discipline Inspection chief Wang Qishan met with Cambodian deputy prime minister Men Sam An in Beijing on Sept. 26. Men, who oversees senate relations and inspection, said she “expects to cement cooperation with China in [disciplinary] inspection and supervision,” according to Chinese state media.

Unusual diplomatic protocol: Wang appears to have bent, or sought permission to bend, regular Chinese diplomatic protocol in meeting Cambodia’s Men Sam An. According to diplomatic ranking, Men should have been arranged to meet Minister of Supervision Yang Xiaodu, head of the highest state anti-corruption department, and not Wang, who is the Chinese Communist Party’s anti-corruption head and a Politburo Standing Committee member.

Why it matters: Wang’s meetings with Men, Steve Bannon, and Lee Hsien Loong were likely arranged by Xi Jinping to show those inside and outside of China that the alliance between him and Wang is still strong. It also indicates that Wang has a very good chance of staying in top office after the 19th Party Congress despite being past the retirement age for senior cadres.

Our take: Xi needs Wang to remain in top leadership position to continue administering the anti-corruption campaign so that he may carry out political and economic reform with little to no distractions from the Jiang faction. Xi and premier Li Keqiang have so far been unable to push through substantial reforms because of interference from them. Wang’s anti-corruption initiative has been crucial in helping Xi consolidate control over the Communist Party. Since assuming office, Xi has purged 1.21 million, or 78 percent of all Party officials.

Expect Wang Qishan to retain his anti-corruption portfolio at the 19th Party Congress and eventually get appointed as the director of a new National Supervisory Commission, which has jurisdiction over both government and state-owned enterprise workers as well as Party cadres.