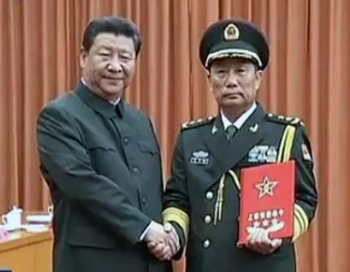 ◎ Purged military members are often replaced by people who owe their promotions to Xi.

Song’s promotion was foreshadowed when he and Zhang Guoshu, the Logistic Support Department political commissar, were reported to have jointly sent a wreath to the wake of recently departed revolutionary general Xiang Shouzhi on Sept. 10. At the time, Song was still commander of the Northern Theater Command.

Why it matters: In recent years, Chinese leader Xi Jinping has been consolidating control over the military by restructuring ranks and purging personnel who are members of former Communist Party leader Jiang Zemin’s political faction. Purged military members are often replaced by people who owe their promotions to Xi.