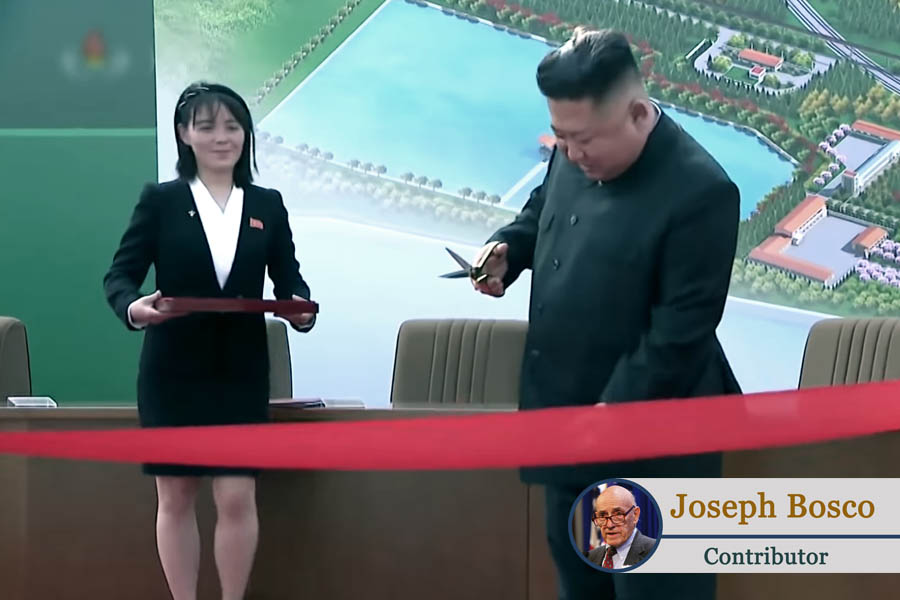 ◎ It is time for the U.S. to stop holding its tongue on the human rights nightmare in North Korea.

Kim Jong Un is back in public view following a prolonged absence that reportedly was related to his health, a possibility reinforced by the increased presence of his sister, Kim Yo Jong. Also back is the gradual but steady escalation of threats emanating from Pyongyang and resulting tensions with South Korea. The two developments seem related, now that Ms. Kim is taking a more visible role in delivering the harsh rhetoric. She announced the termination (for now) of the official communications link between Seoul and Pyongyang, and hinted at further measures to cut off the military hotline. She also indicated North Korea may end its limited economic cooperation with the South.

There is speculation that the heightened hostility is a preemptive measure, lest the United States or South Korea harbor any illusions about using the COVID-19 pandemic to make a military move against the North. Such are the paranoid delusions of the North’s ruling clique.

But it also seems to be part of a pressure campaign to extract further South Korean concessions, and it is having some success with the Moon administration. Seoul just suspended a leaflet information program intended to encourage North Koreans to press the Kim regime for political reform.

Overall, the tough North Korea position reflects its attitude since the breakdown of the Hanoi summit with President Trump in February 2019. That failure was a function of the hard negotiating line Kim revived after he was taken to the woodshed by Xi Jinping in June 2018 when he seemed on the verge of a denuclearization breakthrough with Trump.

The earlier warming Trump-Kim relationship was the product of Washington’s maximum pressure campaign of economic sanctions, threats of “fire and fury,” and the apparent imminence of a human rights offensive that could end in the demise of the Kim family rule. Trump’s series of regime-delegitimizing speeches may have had a greater effect on Pyongyang than the economic sanctions that Beijing was methodically undermining.

Meanwhile, in South Korea, the success of President Moon Jae-in’s party in recent parliamentary elections is encountering growing and somewhat credible allegations of vote fraud. South Korea used voting systems produced by Huawei, the Chinese telecommunications company under suspicion in the West as an instrument of Chinese foreign policy. Adding to the increasingly activist domestic opposition are evidence of problems with military morale and discipline. Calls for Moon’s impeachment drew more than 1.4 million citizens to sign a petition for his ouster.

Moon is heavily criticized for his over-eagerness in improving relations with North Korea at the cost of jeopardizing national security and the alliance with the United States. South Koreans strongly value the American relationship, despite Trump’s harsh rhetoric and demands for a fivefold increase in Seoul’s financial contribution to keep U.S. troops in the country.

Moon’s increasingly cozy relationship with China also poses potential problems for relations with Washington, going back to Seoul’s initial balking at deployment of the THAAD missile defense system because of Chinese objections. At one point, Seoul also terminated  its information-sharing arrangement with Japan, America’s other key Northeast Asia ally, before restoring it under strong U.S. urging and a request from U.S. Ambassador Harry Harris that Seoul coordinate with Washington before making unilateral overtures to Pyongyang. Harris, a retired U.S. Navy admiral who headed the Pacific Command, reportedly angered some South Korean officials in September when he asked a group of legislators about reports that Moon’s advisers are dominated by “leftists who sympathize with North Korea.” Harris was criticized for undiplomatic “rudeness,” but given the national security stakes for both countries, the Moon government’s behavior before and since more than justified his concerns.

Another indication of the success of Beijing’s mix of hard and soft diplomatic/economic pressure is the spread of Confucius Institutes in South Korea. These insidious instruments of Chinese Communist propaganda and disinformation are being rejected and closed out in U.S. universities and several European countries. But the opposite trend is occurring in South Korea. Seoul was host to the world’s first Confucius Institute and there are now 23 in South Korea, more than in any other country in Asia. Their proliferation reflects Beijing’s assessment of their value in softening up public opinion in a pro-China, anti-U.S. posture.

South Koreans who support strong alliance relations with Washington and adhere to universal “Western” values are expressing mounting concerns that the Moon government is subverting that security and democratic relationship. The Communist China-North Korea collusion is bad enough; weakening of the South Korea-U.S. bonds would be disastrous for America’s Indo-Pacific strategy and regional peace. Washington, with supportive elements in the South Korean government and society, should intensify communications with the North Korean people and press for political reform.

Twice in recent days, Pyongyang has lectured, then threatened, the United States over its “meddling,” first regarding China’s violation of its commitments to Hong Kong, then on the rupturing of communications between North and South Korea. Coming to China’s defense — a reversal of their protector-protege roles — it said the U.S. has no standing, because of U.S. protests, to criticize police mistreatment of Hong Kong demonstrators, as if the situations were in any way morally or logically equivalent.

After Washington merely expressed “disappointment” at the break in North-South communications, Kwon Jong Gun, director-general for U.S. affairs at North Korea’s Foreign Ministry, declared with vehemence: “If the U.S. pokes its nose into others’ affairs with careless remarks … it may encounter an unpleasant thing hard to deal with.” Making the threat explicit, he said Washington should “hold its tongue” or confront “a hair-raiser … for the easy holding of upcoming presidential election.”

It is time for the U.S. to stop holding its tongue on the human rights nightmare in North Korea, which also took the life of American student Otto Warmbier, and let the Kim regime start worrying about the prospect of elections of their own.