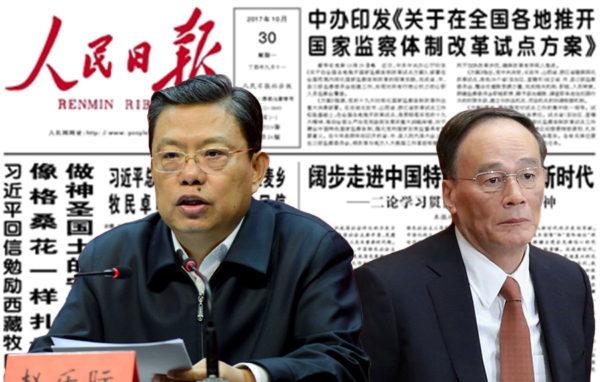 ◎ Zhao Leji appears to have seamlessly picked up where Wang Qishan left off in the anti-corruption campaign.

A Nov. 15 report on the Central Commission for Discipline Inspection (CCDI) website referred to new CCDI chief Zhao Leji as the head of the Leading Group for Deepening Supervisory System Reform.

Why it matters: The CCDI’s subtle revelation of Zhao’s new position indicates that he has replaced Wang Qishan as the leading group’s in-charge. Wang was the leading group’s first head when it was inaugurated last November following the announcement of a pilot program for the new National Supervision Commission (NSC).

The backdrop: Zhao’s appointment follows announcements after the 19th Party Congress regarding the the expansion of the NSC’s pilot program to the rest of the country. The NSC is scheduled to launch after the “National Supervision Law” is passed at the Two Sessions next March.

Our take: Since becoming CCDI chief in October, Zhao Leji appears to have seamlessly picked up where Wang Qishan left off in the anti-corruption campaign. Recent weeks have seen the purge of Liaoning deputy mayor Liu Qiang and former internet czar Lu Wei.

We believe that Zhao stands a good chance of becoming the first NSC head, while Wang may become a vice president with a diplomatic portfolio at the upcoming Two Sessions.

We earlier wrote that Wang’s meeting with foreign VIPs before the 19th Party Congress indicates that he is still in good standing, and could be preparation for his future handling of international affairs. CSIS expert Christopher K. Johnson said in a podcast that Wang is “going to be around” judging by his commentary pieces and private interactions with “key foreign individuals,” and that he may play an “international constituent whisperer” role.