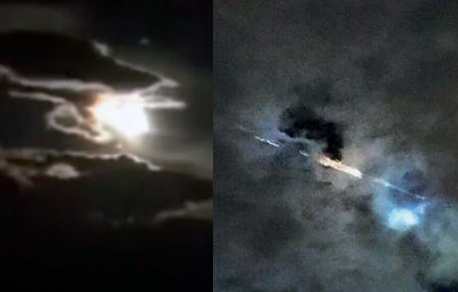 ◎ Chinese astrologists from Hong Kong note that the exploding meteor is an ill-omen for Jiang Zemin.

On the evening of Oct. 4, a meteor exploded over Shangri-La County, Yunnan Province. According to NASA, the fireball exploded with the force of 540 tons of TNT.

1971: Meteor showers were observed in Shuangyang County, Jilin Province. On Sept. 13, CCP no. 2 Lin Biao perished in a plane crash in Mongolia.

The big picture: The factional struggle between Xi Jinping and Jiang Zemin’s faction is set to come to a head at the 19th Party Congress. Xi currently has overwhelming momentum in the political deathmatch, as evidenced by his recent moves:

Our take: Based on our analysis, SinoInsider believes that Xi recently foiled a Jiang faction coup. Thus should the Jiang faction continue to menace Xi, Xi could possibly arrest Jiang and air his crimes. If Xi takes this step, he will win immense popular support, and China’s history could be rewritten.